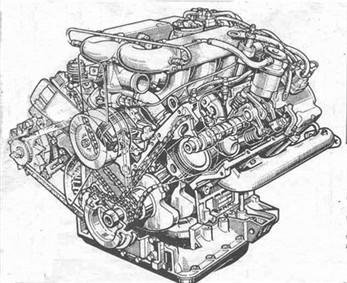 As owners we regularly deal with commonly believed myths surrounding the DeLorean: unreliability, a ‘weak’ engine, poor design. Most will recognize these are altogether subjective or, in some cases, simply not true (alternative facts *cough*). One such annoyingly pervasive myth that is regularly proclaimed by auto journalists is that the PRV was designed as a V8 and subsequently had two of its cylinders chopped off in a knee-jerk reaction to the 1973 oil crisis.

This, quite simply, is not true. 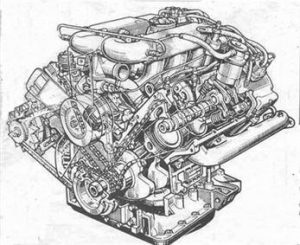 The tale of two cylinders being axed has been told for likely 3 decades now. This, plus the math involved, has resulted in a believable story. V8 engines are normally designed so that the cylinders fire evenly around the 360 degree crankshaft. This works out to 90 degree firing intervals. Conversely, most V6 engines are designed to fire at 60 degree intervals (360 divided by 6 cyl. = 60) to keep everything balanced. You can see where this is going. According to the story, a 90 degree V8 had two cylinders removed, resulting in a 90 degree V6.

When things are repeated over and over again people begin to believe them whether or not they’re true. It’s the hallmark of a great marketing campaign! And this V8 story is no different. I have found a copy of the original Engineering report by the SAE which states the PRV was conceived as a 90 degree oddfire V6 right from the onset, and the reasons why. Considering the math above, a 90 degree V6 does seem illogical. But engineers Francois Gastinne of Peugeot, M. Laliere of Renault and Stephen Wallman of Volvo have spelled it out for us straightforwardly.

The 90 degree configuration allowed the engine 1) a broad RPM range (for the time period), 2) to be lighter and more compact (with the wider vee shape giving the engine a lower centre of gravity), and 3) “greater freedom in choice of engine mounts” due to a sinusoidal torque wave running perpendicular to the crankshaft.

Also worth noting is the engineers’ calculation of maximum gross horsepower as 140, attained from 2.7L of displacement.

The Troubling Trend of Fabricating Facts

The DeLorean is one of the most recognizable, most famous, most talked-about cars in the world. A fascinating story of inception and collapse by the controversial John Z. DeLorean, and its starring role in one of Hollywood’s biggest blockbusters have put the DeLorean under a magnifying glass. In the wake of its expanding popularity in the year 2015, the year Doc and Marty travel to in BTTF II, there has been an influx of articles and video reviews published on most major automotive focused websites. Unfortunately they’re disturbingly inaccurate. Popular auto site Jalopnik posted a top ten list on August 21, where author Aaron Brown wrote that the DeLorean has “awful reliability, terrible quality, low power output, and lack of available replacement parts.” Aside from the low power comment, which is arguably subjective, the rest of the statement is complete fabrication.**On Twitter, Jalopnik’s executive/senior editor, Matt Hardigree, backed Aaron. Working for a major media outlet myself, I absolutely understand that and the need for it in the industry. In this instance, however, that action encourages more poorly researched articles and the outright fabrication of “facts.” One might argue that the writer is entitled to an opinion. This is only true when he hasn’t presented it as fact, and subsequently has it reinforced by a senior editor who arrogantly states, “We’re not wrong, even if you disagree.”The misinformation being presented as fact on genuine car-culture websites lately is cause for concern not only from a DeLorean-owner’s point of view, but from car enthusiasts and collectors’ in general as well.

From a writer’s perspective it is difficult to form an opinion of a car by driving it one time. Unfortunately that is often what writers have to do in order to meet deadlines or scoop the next guy. What does this mean? Writers have a short amount of time to experience a car. The need to write confidently leads them to write hautily; the thought that driving one once qualifies them as an expert. Every miniscule flaw is exaggerated and assumed to be present on every other car regardless of its age, condition, or maintenance history.

Compounding the problem is the DeLorean’s generational popularity, making it oft-compared to modern cars instead of its contemporaries with, unsurprisingly, negative results. This kind of behaviour can be good-natured and fun, but in many instances it’s simply an unprofessional and unnecessary attack on the car. So why do it? It’s trendy to knock DeLoreans simply because they, like Back to the Future, are so prominent in 2015. They’re the hero car of 2015, and as the Green Goblin said in another Hollywood blockbuster, “The one thing they love more than a hero is to see a hero fail.” Unfortunately this practice hurts car enthusiasts and collectors, as facts become muddled among the pervasive untruths and exaggerations.

Writers and editors are in a position of power. When car-centric websites regurgitate imaginary or incorrect information they’re potentially jeopardizing their own credibility, but more importantly they negatively impact car values and collectability. The demand for higher web traffic drives writers to review cars quickly and carelessly, scraping together anecdotal information and adding their own dramatic adjectives. Hot Wheels designer Manson Cheung puts it so concisely: “Restating misinformation and popular opinion does not make it fact.”

The concept of the DeLorean being terrible isn’t new but it is perpetuated by lazy writers, unreasonable comparisons and irrational expectations. Any sensible DeLorean owner won’t deny its quirks (horn on the stalk), faults (too high front springs) and flaws (weak trailing arm bolts). But the assumption that the very earliest 1981 cars’ flaws (I.e. Johnny Carson’s) are current, or the extrapolation made from test-driving one poorly maintained example is unacceptable in responsible journalism.

In my experience, when writers and editors can’t back up their claims or don’t want to engage in genuine conversation, (or suddenly discover you are an owner with more knowledge/experience) they’re quick to shut the conversation down. All other arguments aside, if my 121,000 miles cannot attest to the DeLorean’s reliability, surely Dan Harris’s (VIN 1150) 250,000+ mile daily driver, or Terri and Oliver Holler’s 500,000+ miles – can.

M.
**(To be fair, after the Twitter argument the original post was edited to state that parts were in fact available.)
Uncategorized